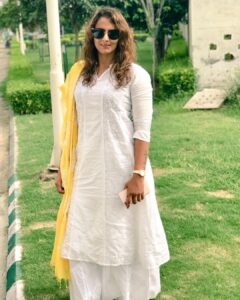 Geeta Phogat was born on 15th December 1988 in Bhiwani Haryana, India. Her hometown is in Balali village Haryana. Her father Mahavir Singh Phogat is a former Wrestler, a senior Olympic coach, and her mentor also. He is also a recipient of the Dronacharya Award. Her mite mother Shobha Kaur is a housewife.

She has four siblings. She has three sisters Babita, Ritu, Sangita Phogat. They all are Indian female wrestlers. Geeta also has a Brother named Dushyant who is also a wrestler. Also her cousin Vinesh Phogat and her sister Babita kumari are also Commonwealth gold medalists.
Her Caste is Jat. She belongs to Hinduism.

Her father enrolled her and her sister Babita at the sports authority of India center in Sonipat as her village was lacking basic and proper facilities. Her father Mahavir Singh Phogat mentored them and left his job.

Under the mentorship of her father, she started her wrestling career. Her father used to train Geeta and Babita on muddy sand, even at the local wrestling matches.
Geeta Phogat made her debut in the international commonwealth wrestling championship which was held in Jalandhar in 2009. She got immense popularity when she won the first-ever gold medal in the 55 kg as a Freestyle Wrestler.

Also, she won the women:s wrestling commonwealth games which were held in Delhi in 2010.
She had a margin of victory by beating Emily Benstead of Australia with a humongous margin of 1-0 and 7-0.

Geeta Phogat also won the silver medal at the Commonwealth Wrestling Championships in the city of Johannesburg, South Africa. She emerged at a third position securing the bronze medal in Doha with freestyle champion at the Asian wrestling championship.

Geeta appointed as a deputy superintendent of police in Haryana in October 2016. She then went on to participate as a contestant in the Khatron Ke Khiladi reality series in 2017.

She married Pawan Kumar on 20th November 2016. Pawan Kumar is also an Indian Wrestler. They were blessed with a baby on December 29th, 2019.

The movie “Dangal” was based on the story of Geeta Phogat and her family. The national sports academy criticized the film and demanded an apology from Aamir Khan for wrongly Portraying the coach character in the film.

In the 2016 Rio Olympics, the Phogat sisters were disqualified due to the two forfeited their repechage bouts because of the ‘injury defaults’ during the Olympic Qualifying Tournament in Ulaanbaatar, Mongolia. the delegation team was not informed about their injuries which caused the disqualification.

The WFI (Wrestling Federation of India) banned the sisters in 2018 from attending the Asian Games which were held in Jakarta. It was due to the reasons that the sisters didn’t show up at the training camp and sessions held in Sonipat and Lucknow. Later on, Geeta gave her reasons and explained the team of members. She was lifted from the ban. She was given permission to attend the tournament.

A film named Dangal was released based on the story of Geeta and Babita with their coach and father Mahavir Singh Phogat. The mentor was played by Aamir Khan. This showcase reached its path to success.

Geeta appointed as a deputy superintendent of police in Haryana in October 2016.

She married Pawan Kumar who also an Indian Wrestler.

Get notified about new articles